Voters have begun voting to select the next ‘guardian’ of Dhaka City from 8 am this morning. Voting will start from eight in the morning till four in the afternoon. Voters will elect two mayors, 129 ward councilors and 43 reserved women councilors in the two cities.

# Electronic voting machines or EVMs will be used in all 2,468 polling stations.

# More than 750 candidates are running for the two mayors’ offices and 172 councilors’ posts.

#04:00 PM: Dhaka City polling has ended without any huge margin collision. There are a few accused of both parties so far. Although voters were present less than expectations. Starting vote counting.

#01:00 PM: Election Commissioner Mahbub Talukder, who visited a polling station around 12:45 Pm, said, “I did not see any polling agent of the opposition. I do not know why…. ”

#11;50 AM: No BNP agents were present in the Dhanmondi area under Dhaka South City Corporation. The voter turnout is less than two hours after the start of the vote.

# 11:40 AM: Ganaforam president and leader of the National Unity Front Dr,. Kamal Hossain said the voter attendance in the elections was not satisfied with the environment.

# 11:16 am: Home Minister Asaduzzaman Khan says the presence of voters seems to be a bit low, but it may increase later in the day. “No untoward incident has been reported in the city polls,” he says after casting his vote.

#10:30 AM: Chhatra League leaders and activists have beaten a man while voting for BNP at the Curzon Hall center of Dhaka University campus under Dhaka South City Corporation. The incident took place in front of Curzon Hall around 10.30 Am.

COMMENTS ON E-VOTING: Dhaka North mayoral candidate Atiqul Islam says electronic voting is interesting. “I’m very happy to cast my vote via EVM,” he says. His rival Tabith Awal says the machine used by his mother to cast her vote broke down for some reason. In the south, Sheikh Fazle Noor Taposh says e-voting was successful, adding: “I think Dhaka residents accepted the EVMs happily.” Taposh’s rival candidate Ishraque Hossain says he cast his vote successfully but it doesn’t mean e-voting is free from errors.

# 10:32 am: PM Sheikh Hasina says the appointment of Bangladeshi staff by diplomatic missions as foreign observers for the Dhaka city polls goes against the electoral code of conduct. She was also critical of the Election Commission for registering Bangladeshi nationals as international observers.

# 10:03 am: Four mayoral candidates for Dhaka North and South cast their votes in the city polls; voting continues peacefully so far.

# 09:13 am: BNP-endorsed mayoral candidate for Dhaka South Ishraque Hossain says: “Nothing can stop me. I’m always ready to deal with any circumstances. I’ll do whatever it takes to make sure voters go to the polling centers.” Ishraque casts doubt over the use of electronic voting machines and alleges that polling agents have been barred from entering the centers.

# 08:49 am: Tabith Awal, the BNP-endorsed mayoral candidate for Dhaka North, says, “It appears we’re not heading into a free and fair election.” He casts his vote at Manarat Dhaka International School & College in Gulshan. 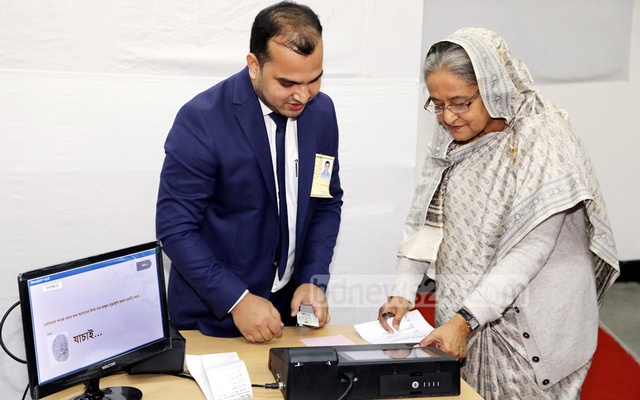 # 08:14 am: Prime Minister Hasina criticizes some diplomatic missions’ decision to appoint Bangladeshi staff members as “foreign observers” for the Dhaka city polls in an apparent breach of the election code of conduct.

# 08:13 am: Prime Minister Sheikh Hasina says she voted for mayoral candidate for Dhaka South Sheikh Fazle Noor Taposh. Hasina spoke to the media, with Taposh standing next to her, after casting her vote.

# 08:06 am: Mayoral candidate for Dhaka North Atiqul Islam casts his vote as the first voter at the Nawab Habibullah Model School and College center.

# 08:05 am: Prime Minister Sheikh Hasina, also chief of the ruling Awami League, casts her vote as the first voter at City College in Dhaka.

# 08:04 am: Weather is clear, but the presence of voters is still thin. Election officials expect the turnout of voters will increase as the day progresses.